MaXpeedingRods Blog
Home DIY&TECH A Full Break Down, Comparison and Reivew on GT2871

Editor’s note: Jermaine Kinge works for a turbocharger reconditioning company and professionally recondition and build hybrid turbos for customers. This article is about what’s his findings on how well built a MaXpeedingRods turbo is, and how well the rotating assembly is balanced, also to see what sort of parts are used inside.

Some of you on here might know me and the fact that I recondition turbos as a side hobby going by the name JK Fab. Throughout my time of doing that I’ve never had my hands on a MaXpeedingRods turbo and have heard both the good & bad stories from them. It’s peaked my curiosity for a long time. Happen to got the GT2871/T28 turbo from MaXpeedingRods and then make the full reviews.

This is a completely unbiased review. I’m just like another customer, just that I know about this kind of stuff a little too much.

The unit came packaged well. It came with a manifold to turbo gasket, banjo bolt for the oil feed and a couple of washers. The washers and banjo bolt look good.

At a first glance, the unit looks pretty good. No fancy marking or identifiers anywhere though. It utilises an Aluminium cast compressor housing.

Just like the GT2871R, it utilises a billet machined seal plate that mates to the compressor housing. This was attached with some sort of hard glue. However, since this turbo is a journal bearing core, I was hoping for the O-ring style seal plate. That allows for easy adjustment and a proper seal, I don’t trust the machined seal plates from personal experience.

Turbine housing looked to be great, very nice machining and clean casting. However, the wastegate port under the actuator flapper is absolutely TINY in comparison to the flapper! This will certainly cause boost creep issues.

I would advise to port this if you plan to run this turbo.

Mounting hardware & brackets are all of high quality, arguably on par in quality with the OE brand-name ones.

It looks to be balanced due to the markings on the turbine wheel, compressor wheel and compressor nut. This indicates that the parts have both been individually balanced and then the whole CHRA balanced on a VSR machine.

Since I have access to a VSR balancing machine, I decided to stick the core on. Usually a big killer of these turbos seems to be a lack of balance. However, since this unit looks to have been balanced I’m really hoping that it doesn’t shoot off the charts in the VSR.

Surprisingly the unit was very well balanced. It “passed” on our Turbo Technics VSR and kept below the maximum amount of vibration up until 70.000rpm. Due to this turbo having such a large compressor wheel, 70.000rpm is sufficient in this test. However, as rotational speed increased so did the vibration of the unit during testing so it may be slightly over the acceptable amount at a given rpm such as 100.000.

Now I’ve had the unit on the VSR, I got to disassembling it and this is what I found:

Single plane balanced. Otherwise looks and feels quality, although it is only a cheap cast wheel.

The turbine shaft is identical to one you would find in a T25 or T28 turbo. The turbine end however, has a bigger turbine wheel to the same specs and design as a genuine GT2871R. It should be noted the GT2871R is a ball bearing unit and this turbo is a journal bearing unit.

This unit uses a 270* thrust bearing, stock in what you would find in a T25 or T28. However due to the size of the compressor wheel I feel like this would not suffice, and would certainly wear at boost levels above 12 psi. Ideally you would want a 360* thrust bearing due to the increased amount of oil flow and coverage.

It should be noted that the core design is completely identical to a T28 turbo. All of the machine work inside the unit looks nice too.

Overall, I don’t think that there is much wrong with this unit. For a low boost application I think this turbo would work quite well. For a cheap unit that costs less than £100 if you know where to look, you can’t really go wrong if you want to turbo for the lows.

I would like to make it clear that i’m just going off what I can see, and being honest on what I think. At the end of the day I’m just another customer. 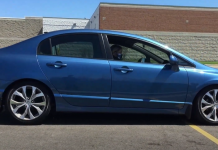