Editor’s note: Patrick Guzowski made a big plan for Grassroots Motorsport $2000 Challenge. In this episode, he updated the 2002 Subaru WRX with MaXpeedingRods Adjustable coilovers.

I’m a fan of Subarus in general and have had 4. I purchased my 2002 WRX on January 27, 2017. So coming up on 3 years of ownership which is a super long time for something to stick around here. Sure we have a select few, but I literally owned the challenge AMG for 70.5 hours.

I just happened to search wrx on craigslist and saw it an hour or so after it was posted. Then I texted and he said he had appointments to show it at 4, 5, 6, and 7. And I just happened to be off and so was he. I literally hooked up the trailer, met him at his gym, bought the car, and he took an uber home with $2750 in his pocket.

As it sits we’re at 243,009 miles on stock almost everything down to the Subaru stamping on the muffler. Sometimes a long time ago it had KYB GR-2 struts installed, which I already hate, and now they’re clunky. The rear brakes are almost spent, and the passenger valve cover is leaking onto the exhaust creating the “dude is your car on fire?” smoke show.

This is the kind of thing it gets used for.

Also when the ground in the yard is frozen and it snows, it does things like this.

Due to the nature of the use of the car(less than 3,000 miles a year, mostly going clearance shopping at Summit racing, picking up craigslist finds, general shop truck things that don’t need a truck), I’m not looking to spend a fortune on things that don’t keep it moving. Also, I’m cheap， I’m always trying to find out how to do it cheaper. Not afraid to say it. So, I have purchased an eBay $92 catback because I want rumbles.

In the interest of using the car as a testbed to find future challenge budget-friendly parts to share with the community a set of coilovers just showed up from MaXpeedingRods.

Several veterans and prospective challenge competitors expressed interest in their products due to the nature of the $2000 challenge budget constraints. I bought a 92mm LS1 throttle body from them in the past and it was a very nicely machined piece.

Hopefully Wednesday I’ll get to install these and document the process so I can give them a fair review. Granted, anything has to be better than blown clunking KYB’s, but still, I plan to give them a workout and report my findings.

My initial impression is they look good versus what I’m used to scrounging for challenge builds. The fronts have 1/4″ thick aluminum camber plates with bearings. They came with 2 spanners. I’m planning to slather all the threads with anti-seize because the car sees road salt.

This evening I took advantage of a break in the wind and rain to get the front done. Everything was straightforward and with the cordless impact, it took about 45 minutes to do both sides.

Initial impressions are very favorable. I was very happy that they have the correct brackets for the brake line and ABS sensor wire, with the correct threads for the factory bolts. In anticipation of road salt, I disassembled things and coated all the threads with lubricating.

The old suspensions on the 2002 Subaru WRX

I learned to hate KYB gr2 shocks and struts back in my Camaro days, so no love was lost here.

I’ve never had coilovers like these before. The springs are set at the factory and to change ride height you thread the whole shock assembly up and down in the round sleeve bolted to the knuckle. I’m used to the kind where you change the spring perch height relative to the shock body. I like this setup because you don’t have to lose travel to change the height. It appears from my eyeball test that you can go from approximately +1″ to -3″ from stock. I’m set up about -1″ upfront.

Hopefully, the weather holds out and I can knock out the backs tomorrow and give a driving impression report.

Friday: let’s test the front suspension and go pass an emissions test.
(points to car at the testing station a few miles away) 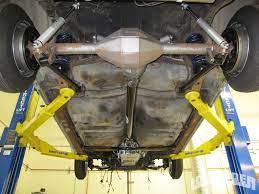 What Causes Control Arms to Break?